I just came across this ancient painting which I think is a wonderful reminder that with all our supposed innovation, much of the educational process has remained recognizably unchanged for centuries. 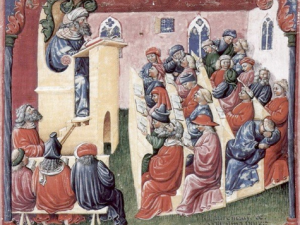 A 700 year old painting of a medieval lecturer and his class by Laurentius de Voltolina from the 14th century, now in the German Nat’l. Museum in Berlin.

Looks to me like there are maybe four Auditory Learners
listening closely to the teacher;

perhaps another six Visual Learners
listening a little as they follow along in their books;

another five or six Social Interaction Learners
who learn mostly by discussing the material.

And then apparently at least four Kinesthetic Learners
who are the ones sound asleep,
who just don’t learn in the context of a lecture
but need to somehow make it active and tangible.

It also looks like there are three typical school staff (Teaching Assistants) on the side catching up on class-related email and teaching prep during class.

But then there is this interesting last guy on the far left.  I’m hoping that he’s an educational coach from the university training team, who’s trying to encourage the teacher to make eye contact and connect with his students; and to teach to a greater mix of learning styles.

What do you think?
Allan

One Reply to “Learning Preferences”