Fifteen Years After Autism Panic, a Plague of Measles Erupts
Legions spurned a long-proven vaccine, putting a generation at risk
By JEANNE WHALEN and BETSY MCKAY

Ms. Jenkins was an infant in 1998, when this region of southwest Wales was a hotbed of resistance to a vaccine for measles, mumps and rubella. Many here refused the vaccine for their children after a British doctor, Andrew Wakefield, suggested it might cause autism and a local newspaper heavily covered the fears. Resistance continued even after the autism link was disproved.

The bill has now come due.
A measles outbreak infected 1,219 people in southwest Wales between November 2012 and early July, compared with 105 cases in all of Wales in 2011.

One of the infected was Ms. Jenkins, whose grandmother, her guardian, hadn’t vaccinated her as a young child. “I was afraid of the autism,” says the grandmother, Margaret Mugford, 63 years old. “It was in all the papers and on TV.”

The outbreak presents a cautionary tale about the limits of disease control. Wales is a modern society with access to modern medical care and scientific thought. Yet legions spurned a long-proven vaccine, putting a generation at risk even after scientists debunked Dr. Wakefield’s autism research.

The outbreak matters to the rest of the world because measles can quickly cross oceans, setting back progress elsewhere in stopping it. By 2000, the U.S. had effectively eliminated new home-grown cases of measles, though small outbreaks persist as travelers bring the virus into the country. New York City health officials this spring traced a Brooklyn outbreak to someone they believe was infected in London.

Measles outbreaks are a “canary in the coal mine,” says James Goodson, the lead measles expert at the U.S. Centers for Disease Control and Prevention. People who refuse one vaccine may be spurning others, setting communities up for outbreaks of other dangerous diseases that are slower to propagate, he says, such as diphtheria and whooping cough.

“Despite the fact that it’s one of the greatest health measures ever invented by man or woman, there seems to still be a small residue of humanity that objects to the very idea of immunization,” says Dai Lloyd, a doctor in Wales who treated many of the recent measles cases. “If you go around the cemetery you can see the historical evidence of childhood slaughter from pre-immunization days.”

Measles is a respiratory condition causing fever, cough and rash. Most people who catch it recover fully. But measles can lead to deafness and pneumonia, and, in about one in 1,000 cases, death. It is one of the most contagious diseases, spread by coughing and sneezing.

It is also among the most preventable, with an effective inoculation since the 1960s that is now commonly given with mumps and rubella vaccines in a combined “MMR” vaccine. The U.K., as did the U.S., categorized measles as “eliminated” over a decade ago, meaning it was no longer circulating from within its borders.

Most measles occurs in developing countries. But it is resurging in some of the very countries that have led global campaigns against it. France was close to eliminating it in 2007 before an outbreak infected more than 20,000 people between 2008 and 2011. Philosophical opposition to vaccines helped cause the outbreak, says the European Centre for Disease Prevention and Control.

“It’s very galling we had measles eliminated and now we’ve got it again” in the U.K., says Paul Cosford, medical director of Public Health England, the government public-health agency.

The autism scare behind the Wales outbreak tracks to the era of Dr. Wakefield, then a researcher at London’s Royal Free Hospital, whose suggestion of a vaccine-autism link began to get press in 1997.

A paper Dr. Wakefield published in 1998 in the Lancet, a medical journal, described 12 “previously normal” children who developed gastrointestinal problems and developmental disorders including autism. His paper concluded that “in most cases, onset of symptoms was after measles, mumps, and rubella immunization. Further investigations are needed to examine this syndrome and its possible relation to this vaccine.”

Medical experts immediately warned parents that they considered the research incomplete and speculative, and said there was no evidence of a link. Among other studies debunking his research, a 2004 review of epidemiological studies by the U.S. Institute of Medicine found no evidence MMR caused autism. 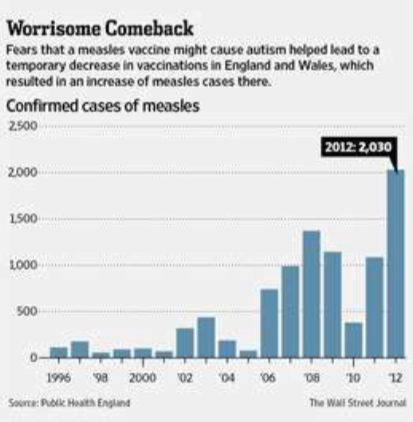 The Lancet retracted Dr. Wakefield’s paper in 2010 after the U.K.’s General Medical Council concluded that his work was “irresponsible and dishonest.” The council that year stripped him of his medical license, saying in a report that he had engaged in “serious professional misconduct.”

Dr. Wakefield says he questioned MMR’s safety but strongly urged parents to continue with a measles-only vaccine. “MMR doesn’t protect against measles,” he says. “Measles vaccine protects against measles.” He says he stands by his work despite contrary conclusions by other scientists. He didn’t respond to subsequent requests for comment on his license revocation.

His report helped spark backlash against MMR, especially in English-speaking countries, say health officials in the U.S., U.K., Australia and other countries. An estimated 2.1% of U.S. children who received other routine vaccines weren’t immunized with MMR in 2000, up from 0.77% in 1995, according to a 2008 study published in Pediatrics that concluded the change was “associated with” Dr. Wakefield’s study.

Dr. Wakefield says he rejects the idea that his research helped cause measles outbreaks, because he told parents to keep vaccinating with measles-only vaccine.

U.S. critics, including some who questioned vaccines in general, continued to campaign against the vaccine. Among them, former Playboy model and actress Jenny McCarthy, who has been named a co-host of ABC’s “The View,” became a leader of the anti-vaccine movement in the U.S. several years ago when in televised interviews she linked her son’s autism to vaccinations. A publicist for Ms. McCarthy, who wrote the forward to a 2010 book by Dr. Wakefield, didn’t respond to requests for comment.

Dr. Wakefield’s work especially reverberated in the U.K. MMR vaccination rates among 2-year-olds in England fell to 80% in the 2004 fiscal year from about 92% in 1997.

But nowhere did the toxic mix of dubious science, sensational headlines and parental fear take a bigger toll than in southwest Wales. As Dr. Wakefield’s concerns gathered steam in Britain’s national media in 1997, a Port Talbot mother, Jackie Eckton, phoned the South Wales Evening Post to ask whether other parents had experienced problems with MMR.

In one 1997 article, Ms. Eckton told the Post the vaccine turned her 3-year-old, Daniel, who had been diagnosed with autism, into a “distant and silent recluse.” She told the paper she wanted to form “some sort of action group so people can help each other fight this thing and what it does.”

The Post instructed parents wanting to join her campaign to phone its news desk.

Within days, parents of 20 other children formed a group led by Ms. Eckton, and demanded  Jump to the full WSJ article