The triumph of marketing finally gets the scrutiny it deserves 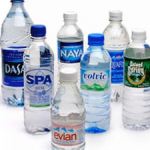 In 1783, George Washington visited the natural springs of Saratoga Springs, N.Y. Along with Thomas Jefferson and James Madison, he took a keen interest in the supposed medicinal qualities of mineral water, a subject of much scientific research at the time.

The following year, a friend wrote to him to describe the difficulty of bottling the strongly effervescent Saratoga water. “Several persons told us that they had corked it tight in bottles, and that the bottles broke,” wrote Washington’s friend. The birth of the United States thus coincided with the origins of bottled water.

The business of bottling water really got going in the 1790s in Switzerland, where doctors acclaimed the medicinal benefits of the artificially carbonated water sold by Nicholas Paul and Jacob Schweppe. The pair began exporting their bottled soda water in 1800, and such was its popularity in London that Benjamin Silliman, a visiting American chemistry professor, decided to set up his own soda-water venture in the United States. Others soon followed suit, and bottled water became a popular health drink.

But bottled water’s mass appeal really began in the U.S. with the marketing of Perrier, imported from France, during the 1970s. The industry has not looked back since.

In recent years, though, sparkling water has been eclipsed by still water in popularity. Last year, sales of bottled water in the United States reached $11 billion. Globally, the figure may be as high as $100 billion annually.

Go into a restaurant or a supermarket and you will be offered water from all over the planet. The idea that bottled water from particular places is good for you has persisted since Washington’s time, though today it is not statesmen but supermodels, rock stars and actors who set the trend with their preferences.

Bottled water may look and taste pure enough, but the whole idea stinks. For a start, bottled water is indistinguishable from tap water. Put five bottled waters up against tap water in a blind tasting and see if you can tell the difference. L.A. tap water came out on top in a 2006 blind tasting, beating water from New York and Seattle, among others. One judge called L.A.’s water “exceptional. Like a bottled water.”

In many cases, bottled water is actually derived from tap water and filtered — which is why PepsiCo has just agreed to add the words “public water source” to the label of its Aquafina water. But water from glacial springs is not inherently superior. Worse, shipping it around causes unnecessary environmental damage. Bottled water is often refrigerated before sale, wasting even more energy. Then there are the millions of plastic bottles, many of which end up in landfills.

Surely bottled water is purer and safer? Actually, no. The regulations governing the quality of public water supplies are far stricter than those governing bottled-water plants. True, there are sometimes contamination problems with tap water, but the same is true of bottled water.

The industry responds that it is not selling water; it is selling “portable hydration.” But filling a bottle from the tap works just as well. The industry also likes to point out that bottled water is a healthy, calorie-free alternative to sugary soda drinks. The same goes for tap water.

Bottled water would appear to be the ultimate triumph of marketing. If you can get people to pay so much for something that is already available at very low cost in their own homes, doesn’t that suggest that they will buy anything? Canned air, anyone? Of course, in a free society, people should be able to spend their money on silly things, provided they are in full possession of the facts. But many people are not, judging by the persistence of the idea that there is something magically superior about bottled water.

But now a backlash against bottled water is gathering pace as people realize just how daft it is. (Actually it is worse than daft; it is decadent to shun perfectly good tap water, given that more than 1 billion people on the planet lack access to it.) Many fancy restaurants now proudly proclaim that they serve tap water to burnish their green credentials. Restaurant patrons are increasingly prepared to ask unashamedly for tap water when offered expensive bottled stuff.

Campaigns such as “Think Outside the Bottle” attack bottled water as part of a corporate conspiracy to seize control of the world’s water. Meanwhile, UNICEF’s Tap Project, launched in March, uses the power of branding to promote tap water. 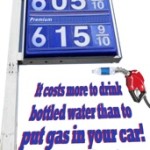 New York tap water has, for example, been re-branded “NY Tap” and, on World Water Day, participating restaurants in the city suggest a donation for the tap water they usually provide for free, with the proceeds going to water projects in developing countries. I’ll drink to that. Sparkling or still? Tap, please.

also see:
Tom Standage is the author of “A History of the World in Six Glasses.”
http://www.latimes.com/news/opinion/la-oe-standage7aug07,0,6787134.story?coll=la-opinion-rightrail