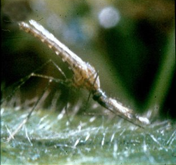 Only the female Anopheles mosquito caries malaria and only they put their tale up when they bite you. If the tail’s not up, it’s not a malaria mosquito. 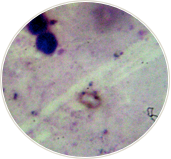 I took this with my son’s camera at the YWAM Clinic in Kangulumira Uganda. You can see the distinctive double dotted ring form of P. falciparum malaria (lower middle), and two schizonts (upper left)

ITNs protect millions of people from malaria, but

though they are subsidized in most developing nations, helping families afford to have them is a challenge. And for families, having to decide which of their children will sleep under a single net and which will remain exposed is a heart-breaking choice.

1972 has been responsible for approx. 97 million preventable malaria deaths, an infanticide far greater than Stalin, Mao, and Pol Pot combined).
(See Malaria Clock) Only in the last few years has limited residential spraying again been allowed in some nations. Spraying DDT inside dwellings presents no discernible human or environmental hazard.

With the Chloroquine quickly loosing it effectiveness to treat the most dangerous type of malaria (P. falciparum) due to increasing resistance, for the past 10 years we’ve been transitioning to a new and effective malaria treatment based on Artiseminin from  the Chinese Sweet Wormwood plant. However to try to slow the development of resistance to this drug, since about 2005 the WHO is only promoting its use in combination with another antimalarial in an Artiseminin Combination Therapy (ACT).  In Cambodia the derived compound Artusunate is combined with mefloquine; in West Africa with Amodiaquine but here in EastAfrica we’ve seen ih combinations with Lumefantrine and with Piperquine.

In 1991 at Tulane we were developing rapid “inexpensive” antibody test for malaria, but I first saw them field tested in Sierra Leone in 2005, but this year is the first year we’ve had them widely available.

However even at US$1.50/test the Rapid Test is not affordable in many situations (and it only detects P. falciparummalaria) so at most clinics in Uganda the lab technician’s skills in microscopy are still necessary or in the many first line clinics, fever is just presumptively treated as malaria.

From Moscow to Miami, Nome to New Orleans, in most of the industrialized nations, malaria has been eradicated from it’s former range. While the mosquitoes are still there, a sustained collaboration between public health and household-level behavioral change has made a difference.

One Reply to “Practical Approaches in fighting Malaria”